The headlines told the story of an ecological disaster, made worse by capitalist politics.

It began with an intense storm. While no specific weather event can be ascribed to global warming, one result of climate change is a significant increase in the intensity of extreme storms.

The storm hit a densely-populated river delta, where natural barriers that once would have moderated its fury had been removed in years of anti-environmental mismanagement.

It struck an area largely populated by an oppressed minority. Their homes were swept away, and there were few if any provisions for emergency aid or support.

The government made a bad situation worse by its inability or unwillingness to move quickly to aid its hungry and homeless citizens — and it refused to accept humanitarian aid offered by others.

Obviously, that’s a description of the Cyclone Nargis crisis in Burma today. 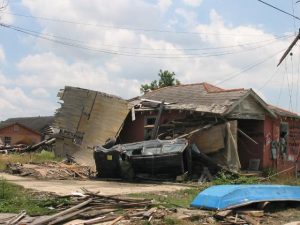 But it also describes the Katrina disaster in New Orleans and southern Louisiana less than three years ago. Far fewer people died in New Orleans, but the sequence of events was so similar that it is hard not to see Katrina as a dress rehearsal for Cyclone Nargis.

In both cases, a serious storm was made worse by global warming. Both were made more destructive by grossly anti-ecological land management. And both were made catastrophic by a ruling class that values profit and privilege more than people.

In his 1921 book Historical Materialism, the Bolshevik leader Nikolai Bukharin warned against the view that man is the lord of creation, “with nature created for his use, and all things adapted to human needs.”

“As a matter of fact, nature often falls upon the ‘lord of creation’ in such a savage manner that he is obliged to admit her superiority.”

That’s just what happened in New Orleans and Burma — and in each case human activity made nature’s savagery even worse. For hundreds of millions of people around the world, New Orleans was a warning and Burma is the future. If capitalism isn’t stopped, the Burmese experience will be repeated many times.