As I’ve written previously, the Climate Change Denial Industry is still active despite the IPCC Report — but it’s also true that it has become unfashionable as an explicit political stance, at least in Canada. After years of inaction, politicians of every stripe are actively seeking to outdo each other in pledges to fight global warming.

For Conservative Party politicians, the preferred approach is restrictions on “emissions intensity.” The idea is to encourage industry to invest in R&D that will reduce the greenhouse gas (GHG) emissions per unit of output. This will make Canada a leader in “green technology” that “we” (ie, the corporations that back the Conservative Party) can sell worldwide. Canadian capitalism will do well by doing good.

First out of the gate was the Conservative government of Alberta, the province whose industries generate 31% of Canada’s GHG emissions, despite having a population and GDP share just over 10%

On March 8, Alberta Premier Ed Stelmach announced a bill to require about 100 large facilities, which together produce about 70% of the province’s emissions, to cut their emissions intensity by 12% this year. That sounds tougher than it really is, since the plan allows companies that don’t meet the goal to instead pay $15 per excess tonne into a government technology fund, or to invest in an “Alberta-based offset.”

Federal Prime Minister Stephen Harper (also a Conservative) stood beside Stelmach when the “Specified Gas Emitters Regulation” was announced, endorsing the Alberta approach. “All Canadians are looking for a balance between economic growth and environmental protection,” Harper told reporters. “Finding that balance is the fundamental challenge of our time.”

Harper is expected to announce his own emissions intensity program next month. “We’ll treat all regions and sectors equitably and those will be the minimum standards we will expect in every province in Canada,” he said. (Canwest News, March 9, 2007)

It’s easy to show that controls on emissions intensity don’t necessarily reduce actual emissions. If the oil sands reduce their intensity by 12%, while increasing production by 20%, total emissions will increase.

That’s simple math — but it isn’t just playing with numbers. Way back in 1865, Stanley Jevons noted that a 66% reduction in the coal needed to produce steel had resulted in a 1000% increase in the amount of coal used in the steel industry over 30 years. It was more efficient, so coal was cheaper, so the industry used it to vastly increase production. That observation was generalized in the 20th Century into what economists call the Khazzoom-Brookes Postulate — lower energy costs result in increased energy use.

But we don’t have to take our argument from Victorian England or from abstract economic theory. Statistics published this month in a report by the Chief Economist of CIBC World Markets (the investment/brokerage arm of Canada’s fifth largest bank) prove that the processes described by Khazzoom and Brookes have been fully operational in Canada. 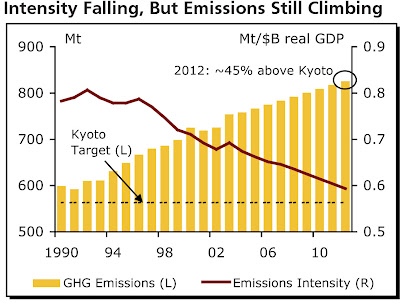 In the words of the CIBC report:

“At current rates of economic growth, achieving the Kyoto emissions target would then require a quantum leap in energy efficiency: annual reductions in intensity that are roughly four times the current trend.”

What the report doesn’t say is that a 400% percent increase in energy efficiency would reduce production costs for the oil sands and coal-fired power plants and other big emitters. That would allow them to grab more market share and radically jack up production — and increase emissions.

That could be called that the Khazzoom-Brookes Postulate in action — but it’s actually the illogical logic of capitalism, in which the growth of individual firms or industries always takes precedence over the needs of society as a whole.