Carbon offsets are the modern day indulgences, sold to an increasingly carbon conscious public to absolve their climate sins. Scratch the surface, however, and a disturbing picture emerges, where creative accountancy and elaborate shell games cover up the impossibility of verifying genuine climate change benefits, and where communities in the South often have little choice as offset projects are inflicted on them.

In a previous post, I noted that the Canadian band Barenaked Ladies, like many rock bands worldwide, has been claiming that “carbon offsets” balance the greenhouse gases created during its tours. While not in the least doubting their sincerity, I recommended that they visit the spoof website Cheatneutral.

Now I can recommend something much more substantial and convincing. The Carbon Neutral Myth: Offset Indulgences for Your Climate Sins demonstrates that the carbon offset industry is “state of the art greenwash.” 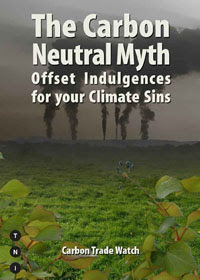 This report argues that offsets place disproportionate emphasis on individual lifestyles and carbon footprints, distracting attention from the wider, systemic changes and collective political action that needs to be taken to tackle climate change. Promoting more effective and empowering approaches involves moving away from the marketing gimmicks, celebrity endorsements, technological quick fixes, and the North/South exploitation that the carbon offsets industry embodies.Author Kevin Smith, a researcher with Carbon Trade Watch, argues that “the only effective way of dealing with climate change is to dramatically decrease our current rates of fossil fuel consumption. Offsets are providing a justification to maintain our carbon-intensive lifestyles, and delaying the profound changes we need to make in our societies.”

When companies like Climate Care and the Carbon Neutral Company sell the public carbon offsets, carbon savings expected to be made in the future are counted as savings made in the present. Offset companies give the idea that emissions are instantly “neutralised” when in fact the supposed “neutralisation” can take place over periods of up to a hundred years. Regular offsetting worsens the problem because the rate at which carbon emissions are ‘neutralised’ is far slower than the rate at which they are generated.

The Carbon Neutral Myth – Offset Indulgences for Your Climate Sins is published by Carbon Trade Watch, a project of the Amsterdam-based Transnational Institute. It offers in-depth research and case studies in support of its argument that:

The full text of The Carbon Neutral Myth: Offset Indulgences for Your Climate Sins is available online. It can be downloaded at www.carbontradewatch.org/pubs/carbon_neutral_myth.pdf