The 13th annual Banking on Climate Chaos report exposes the stark disparity between public climate commitments being made by the world’s largest banks, and the reality of business-as-usual financing to the fossil fuel industry. To be blunt: when the big banks promised to cut funding to oil, gas and coal, they were lying. 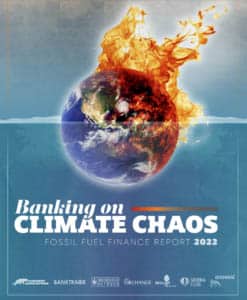 In the six years since the Paris Agreement was adopted, the world’s 60 largest private banks financed fossil fuels with USD $4.6 trillion, with $742 billion in 2021 alone. 2021 fossil fuel financing numbers remained above 2016 levels, when the Paris Agreement was signed. Of particular significance is the revelation that the 60 banks profiled in the report funneled $185.5 billion just last year into the 100 companies doing the most to expand the fossil fuel sector.

The most comprehensive global analysis on fossil fuel banking to date was authored by Rainforest Action Network, BankTrack, Indigenous Environmental Network, Oil Change International, Reclaim Finance, Sierra Club, and Urgewald, and is endorsed by over 500 organizations from more than 50 countries around the world.

As global oil and gas markets are rocked by Russia’s invasion of Ukraine, the data reveal JPMorgan Chase to be the biggest banker covered in this report for Russian state energy giant Gazprom, both in terms of 2016-2021 totals and when looking only at last year. JPMorgan Chase provided Gazprom with $1.1 billion in fossil fuel financing in 2021.

The report includes a timeline that lays out how banks that joined the Net-Zero Banking Alliance (NZBA, part of the Glasgow Financial Alliance for Net Zero) last year simultaneously financed some of the most egregious oil and gas expansion companies, potentially helping to lock the planet into decades of climate-warming emissions.

Immediately following the April 2021 launch of the NZBA, many signatory and soon-to-be-signatory banks engaged in huge transactions completely counter to achieving “net zero,” including: May 2021: $10B to Saudi Aramco (Citi, JPMorgan Chase), $1.5B to Abu Dhabi National Oil Co. (Citi); June 2021: $12.5B to QatarEnergy (Citi, JPMorgan Chase, Bank of America, Goldman Sachs); August 2021: $10B to ExxonMobil (Citi, JPMorgan Chase, Bank of America, Morgan Stanley). Out of the 44 banks in this report currently committed to net-zero financed emissions by 2050, 27 still don’t have a meaningful no-expansion policy for any part of the fossil fuel industry.

The world’s leading climate scientists have concluded that existing reserves of fossil fuels contain more than enough carbon pollution to break our remaining ‘carbon budget’ and thrust the world past 2 degrees Celsius of warming — let alone the 1.5 degree aspirations of the Paris Agreement — and the climate catastrophe that entails.

The new Global Oil and Gas Exit List shows that upstream oil and gas expansion is remarkably concentrated: the top 20 companies are responsible for more than half of fossil fuel development and exploration. Banking on Climate Chaos shows that bank support for those companies is also remarkably concentrated: the top 10 bankers of those top 20 companies are responsible for 63% of the companies’ big-bank financing since Paris. Each of those top ten bankers has supposedly committed to net zero by 2050: JPMorgan Chase, Citi, Bank of America, BNP Paribas, HSBC, Barclays, Morgan Stanley, Goldman Sachs, Crédit Agricole, Société Générale.

Liquefied natural gas (LNG): Morgan Stanley, RBC, and Goldman Sachs were 2021’s worst bankers of LNG, a sector that is looking to banks to help push through a slate of enormous infrastructure projects.

Coal power: Coal power funding has been essentially flat the last three years, at around $44 billion — which is alarming given that coal power needs to be rapidly phased out this decade and next. China Merchants Bank and Ping An Group led financing for the sector last year.

Adapted from materials provided by Banking on Climate Chaos