A special edition of Ecosocialist Bookshelf: six books we recommend for understanding the deadliest global health crisis of our time 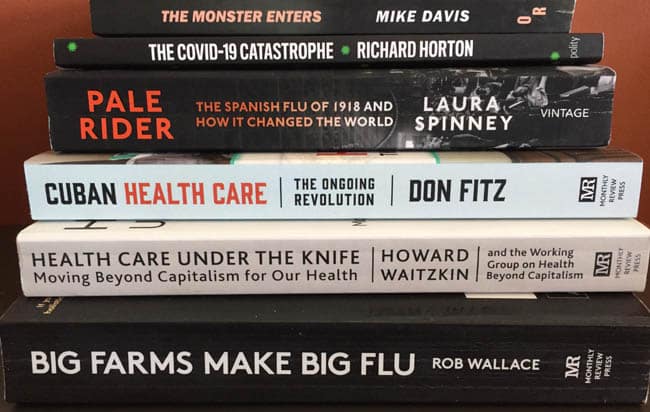 Ecosocialist Bookshelf is an occasional feature. This edition focuses on viruses and health care, on capitalism’s failure to protect human health, and radical alternatives.

Mike Davis
THE MONSTER ENTERS
Covid-19, Avian Flu and the Plagues of Capitalism
OR Books, 2020
In an expanded edition of his earlier book, The Monster at Our Door, Davis sets the current crisis in the context of previous viral catastrophes, and surveys the scientific and political roots of today’s viral apocalypse. He shows how agribusiness and the fast-food industries, abetted by corrupt governments and a capitalist global system careening out of control, created the ecological pre-conditions for the new plague.

Richard Horton
THE COVID-19 CATASTROPHE
What’s Gone Wrong and How to Stop It Happening Again
Polity Press, 2020
Warnings about the threat of a new pandemic have been made repeatedly since the 1980s, but the governments of Britain and the United States were totally unprepared. The editor of the medical journal The Lancet scrutinizes the actions that governments around the world took – and failed to take – as the virus spread from its origins in Wuhan to the global pandemic that it is today.

Laura Spinney
PALE RIDER
The Spanish Flu of 1918 and How It Changed the World
Penguin Random House, 2017
The Spanish flu of 1918–1920 was the greatest human disaster of twentieth century, killing 50 to 100 million people in all parts of the world. Pale Rider is a highly readable account of the origins, spread and effects of a pandemic that swept the world a century before Covid-19.

Rob Wallace.
BIG FARMS MAKE BIG FLU
Dispatches on Infectious Disease, Agribusiness, and the Nature of Science
Monthly Review Press, 2016
Socialist epidemiologist Rob Wallace integrates the political economies of disease and science into a new understanding of infections. He tracks the ways influenza and other pathogens emerge from an agriculture controlled by multinational corporations and proposes sensible alternatives to lethal agribusiness.

Howard Waitzkin
HEALTH CARE UNDER THE KNIFE
Moving Beyond Capitalism for Our Health
Monthly Review Press, 2018
Health-care professionals, scholars, and activists examine the “medical industrial complex,” and detail case studies and successful efforts for creating more humane communities. A powerful critique of capitalist policies, this book ultimately gives us hope that our health-care system can be rescued and made an integral part of a new and radically different society.

Don Fitz
CUBAN HEALTH CARE
The Ongoing Revolution
Monthly Review Press, 2020
Cuba hasn’t escaped the virus, but its response has been among the fastest and most effective in the world. Don Fitz’s account of the transformation of Cuban medicine provides a clear and inspiring picture of how a beleaguered country has created a superior medical system, with health indicators and results that surpass those of the United States, at a fraction of the cost.