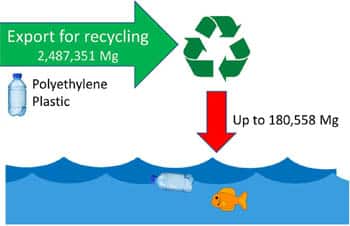 Researchers from National University of Ireland Galway and the University of Limerick have concluded that “Recycling of European plastic is a pathway for plastic debris in the ocean.” That’s the title of a study published this week in the journal Environment International, showing that much of the plastic supposedly recycled by the EU, UK, Switzerland and Norway actually ends up in the ocean.

46% of European separated plastic waste is exported thousands of kilometres to countries in Southeast Asia. Once there, a large share of the waste is rejected from recycling streams into overstretched local dumps that contribute significantly to ocean littering.

The researchers estimate that in 2017 up to 180,558 tonnes of polyethylene from Europe ended up in the ocean. Polyethylene is one of the most common types of plastic in Europe, and the results showed that  the UK, Slovenia, and Italy are exporting a higher share of plastic outside of Europe and see a higher share of their recyclable plastic waste end up as ocean debris.

Lead author George Bishop says that the results indicate “an important and previously undocumented pathway of plastic debris entering the oceans, which will have considerable environmental and social impacts on marine ecosystems and coastal communities.”

Using detailed international trade data and data on waste management in destination countries, the study modeled the fate of all polyethylene exported for recycling from Europe, accounting for different fates ranging from successful conversion into recycled resins, or ending up as landfill, incineration, or ocean debris.

Co-author David Styles explains, “Given that such a large share of waste destined for recycling is exported, with poor downstream traceability, this study suggests that ‘true’ recycling rates may deviate significantly from rates reported by municipalities and countries where the waste originates. In fact, our study found that up to 31% of the exported plastic wasn’t actually recycled at all.”