We must understand how can we slow down changes that have already begun, which changes we can reverse, and how we can adapt those we can’t stop

Capitalism generates environmental damage and climate chaos—but we have the power to stop it by transforming the world, author Ian Angus explained to Socialist Worker 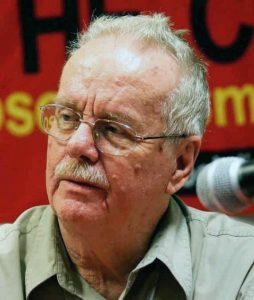 On July 7-9, I was in London (UK) to speak at the Marxism Festival, an annual conference organized by the Socialist Workers Party. I have some political differences with the SWP, but I was impressed by the enthusiasm and commitment of the 2500 participants, and by the number of sessions that were devoted to environmental and scientific questions.

I was the featured speaker at two sessions, one on Facing the Anthropocene, and one launching my new book, A Redder Shade of Green. Both sessions were recorded: I will post links when they are available. After my second talk, I was interviewed by Dave Sewell for the SWP’s weekly newspaper Socialist Worker.

HOW CAN WE SAVE THE PLANET AND STOP CATASTROPHIC CLIMATE CHANGE?

The environmental conditions that have sustained human civilisation throughout its history are collapsing, capitalism is to blame and only socialism has the solution. That’s the warning sounded by Ian Angus, author and editor of Climate and Capitalism website. He told Socialist Worker,

“The planet is going to change substantially. Big parts of it will be uninhabitable by the end of this century if we don’t do something now. It’s very likely that in this century ocean levels will rise by at least a meter or two, maybe more. That would mean the Thames is going to overflow and flood much of inner London. Many cities are right next to oceans. They will be flooded—not tomorrow but within our children’s lifetime or our grandchildren’s lifetime.

“In some parts of the world it’s going to be too hot to work. Many of these are places where a lot of our food comes from, so we’ll have to deal with problems with food production too.”

Ian has played an important role in popularising the concept of the “Anthropocene” on the left. Many geologists argue that the relatively stable environment conditions in place since the Ice Ages ended are giving way to something much more chaotic.

Ian explained, “Today we see global warming, mass extinctions, and other multiple environmental crises all converging. These symptoms all relate to what’s called the Anthropocene.” This proposed new epoch is named after the Greek word for “man.” That’s because the driving force behind this crisis is a human society dominated by capitalism.

“In the decades since the Second World War, humanity’s impact on the Earth has gone beyond what it used to be. Through history we certainly wrecked things, but we didn’t disrupt the way the entire Earth system works. Now humanity’s impact through fossil fuels, destructive forms of mining and agriculture and more, is doing that.”

This is due to the way our society is organised.

“Fundamentally it’s a problem of capitalism,” said Ian. “It’s a problem that our social structure, instead of working along with earth’s natural processes, works against them.

“That means dealing with everything in the extraordinarily short term. It means using up resources that needed to be carefully husbanded. It means destroying the soil’s fertility so that you have to keep dumping more and more fertiliser into it. Under capitalism you don’t have farming to produce food for human beings, you have agriculture to turn fossil fuels into products for the supermarket.

“We have this system that’s driven by growth. It must grow intensely and constantly in order to survive. “That undermines the basis on which life has evolved on the planet—including our species.”

Many commentators try to spread the blame from the system to humanity as a whole. One recurring claim is that there are too many people. This lets the system off the hook and—even if people don’t intend it—strengthens the justifications used for attacking migrants and the poor. It’s also not true, Ian explained.

“This is a global issue,” he said. “And there are about three billion people on this Earth who contribute nothing to global warming, people whose greenhouse gas emissions are essentially zero. And you’ve got another 2.5 billion or more whose emissions are very slight. So it’s not about what individuals are doing but what giant corporations are doing. Or the US military and the British military—they have a bigger impact on climate than any million people you would come across.”

Politicians cross the world congratulated themselves for ratifying the Paris agreement on climate change. But, Ian said,

“The only really remarkable thing about the Paris agreement is that they actually managed to sign it. When you look at what they signed, it’s all ‘aspirational’ goals.

“There are no requirements for the signatories to do anything specific. Each one will figure out their own plans, and face no penalties for not carrying them out. It’s an agreement that’s built on the assumption that there’s nothing really seriously wrong.

“It imagines that we could solve this by, say, adding a few pennies to the price of petrol, when really we have to confront the fact that we have to stop using fossil fuels.

“And even at that level of minuscule aspirations, the biggest capitalist country in the world has just pulled out of it. The US government pulled out of an agreement that didn’t require it to do anything, so it could avoid even admitting there’s a problem. That’s scary.”

The need for action is urgent. Ian said.

“The changes are underway—the question is going to be how can we slow them down, how can we adapt to them, what can we reverse. Our governments aren’t thinking about those questions, let alone answering them. We can confront the problem now, but the longer we delay taking action the harder it is going to be.”

“I sympathize with the idea that it’s too big to grapple with. We are talking for almost the first time in human history about problems on a global scale. Back in the 20th century we confronted the problem of atomic testing where nuclear weapons were being fired and the fallout was spreading all over the world. We managed to force them to stop nuclear testing, substantial movements did that.

“Though we had the advantage then that it was just a small number of countries doing that. Similarly we successfully reversed the release of chemicals that were destroying the ozone layer. Though again, we had a single change to be made, involving a relatively small number of companies. Now we need to deal with changes that affect the whole way the economy works globally.”

But that doesn’t make it impossible. Ian is hopeful about the environmental movement.

“We can push back against this drive to expand fossil fuel production. We can push back against fracking, and propose alternatives like investing in wind farms and creating climate jobs. Movements are built by people taking on the struggles around them and gradually expanding. The key will be building a counterforce to this utterly irrational system.”

Some unions see the fight against climate change as a distraction from—or even a threat to—battles on issues such as jobs. But for Ian, the issues are linked. “We’re talking about how we going to function in a world where we’d better stop using fossil fuels pretty quickly,” he said. “That means we have to make a fairly radical shift in the nature of jobs, in the nature of how our economy works.”

He is even more critical of those who argue that the urgency of climate change means socialist ideas and workers’ demands need to wait.

Some environmentalists argue that as all of humanity is affected we need a movement broad enough that even capitalists and right wingers can get behind.  But, Ian said,

“So there isn’t some kind of artificial division here. We certainly do have to build movements that bring together socialists and people who aren’t socialists. But we also have to recognize that without a fairly radical shift in the underlying nature of the economy there will not be solutions.”