A valuable introduction to the development of Marxist thinking on the environment, by a leading ecosocialist. Michael Löwy explores proposals for radical change, and concrete experiences of the global struggle against ecocide. 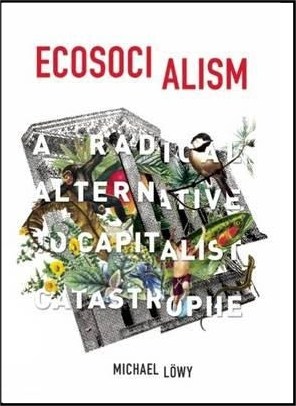 Ecosocialism is an important introduction to Marxist strategies to stop environmental destruction. It assumes even greater importance since the 2015 United Nations summit on climate change in Paris demonstrated the inability of capitalist states to provide a solution to the ecological crisis. Despite years of protests and lobbying at such summits, environmentalists have failed to influence the masters of the system. It is time for environmentalists to adopt a new theory and strategy.

Löwy lays out the ecosocialist alternative to capitalism. Ecosocialism asserts that “only a collective and democratic reorganization of the productive system could . . . satisfy real social needs, reduce labor time, suppress useless and/or dangerous production, and replace fossil fuels with renewable energy sources.” All of society’s productive forces must be subject to “a democratic, ecosocialist plan.”

Löwy traces the development of ecosocialist ideas, particularly since the 1970s. This overview provides a useful introduction to the development of Marxist thinking on the environment, especially for those new to the subject. Löwy stresses that while reforms are necessary, they are not a solution to capitalism’s ecological crisis. Ecosocialists must convince their fellow activists to connect the struggle for immediate change to a more substantive socio-ecological transformation.

In the short term, we must fight for reforms such as the construction of public transportation instead of new automobile infrastructure, and a ban on toxic substances in the water, soil, and atmosphere; we must reject the system of debt and neoliberal structural adjustment imposed on countries around the world, and take measures to address unemployment, such as reducing work time.

However such reform efforts are insufficient to create an ecologically sustainable society. They address neither the root causes of ecological crises, nor keep pace with the destructive tendencies of the system. We have to connect the movements for reform to a broader strategy of revolutionary change.

“The struggle for ecosocial reforms can be the vehicle for dynamic change, a ‘transition’ between minimal demands and the maximal program,” Löwy writes, “provided one rejects the pressure and the arguments of the ruling interests for ‘competitiveness’ and ‘modernization’ in the name of the ‘rules of the market.’” He makes the point that “each success, even if limited, if won through collective action, is a step in the right direction and, above all, an advance in the people’s acquisition of consciousness and self-organization—the main conditions for transcendence of the system.”

As an alternative to the anarchy of the capitalist system, one goal of ecosocialism is “global democratic planning.” Often the concepts of socialism and planning are equated with centralized state bureaucracy. Löwy provides an important clarification. The point of ecosocialist planning is the extension of democracy into the economic sphere so that the working class can collectively define its own needs and make rational decisions about production.

Under capitalism, corporations and their states organize production based on profitability. Historically the working class has won improvements in working conditions and wages, introduced some aspects of worker control in a small percentage of factories, and attempted to address issues of racial and gender inequality. However the global ruling class ceaselessly attacks the modest gains that have been won. Global trade agreements make it easier for corporations to relocate if profitability is impacted by local regulations to protect the environment and worker safety. Companies use the threat of relocation to impose harsh labor conditions and ecological costs onto local communities.

Capitalists decide what goods and services workers will produce, and the conditions under which they will produce them. Workers then confront the products of their labor as consumers in a marketplace of commodities. As consumers, workers exercise limited choice, in a context that is heavily conditioned by advertising. Löwy highlights advertising as a key mechanism of the rule of capital and a driving force in the global ecological crisis. Advertising pollutes our physical and psychological landscape. Advertisers promote the idea that the choice between Coke and Pepsi is a meaningful one, while disguising the absence of real choice and democracy at the core of the global system of production.

Ecosocialists see the “suppression of harassment by advertising” as a necessary step toward creating the “conditions under which people can, little by little, discover their real needs and qualitatively change their ways of consumption.” While some environmentalists blame the ecological crisis on over-consumption and individual consumer choices, Löwy argues that we need to examine the root causes of consumption. Calling for a limit on aggressive advertising “is an environmental duty” that challenges the logic of capital, and allows us to wage “the fight for a different civilizational paradigm.”

How do we link the immediate struggles for environmental reform to the long-term goal of revolutionary transformation? Löwy answers this by pointing to specific examples of popular struggle such as The Forest People’s Alliance to stop the destruction of the Amazon. Chico Mendes, the socialist and union organizer, united rural workers and indigenous communities into a solid movement against multinationals and local landowners. The Forest People’s Alliance fought against the dispossession of indigenous people, the clear-cutting the forests for lumber, and the further establishment of plantations and ranches.

While destruction of the Amazon continues, and Mendes himself assassinated, Löwy explains the importance of learning from the work of the Alliance. It points a way toward “alternative models of development, symbolized by models of socio-environmentalism that combine sustainable management of natural resources with the valorization of local practices and knowledge.”

Löwy concludes the book with a broader discussion of the Indigenous environmental struggle mainly in Latin America. He shows how these movements have shaped leftist governments in Latin America and confronted domestic as well as multinational corporations. He briefly discusses cross-sector meetings such as the World Social Forum and the World People’s Conference on Climate Change in Cochabamba. However, since the book targets an English-reading audience, it would have been useful to include a discussion of Indigenous struggle in the Global North. The book could also have benefited from a concluding chapter to draw out the lessons of rural struggles in Latin America for readers who are unfamiliar with this history.

While he makes a spirited case for ecosocialism, Löwy does concede to the claim that Marxism has a so-called “productivist” tendency that privileges industrial development over the environment. He cites the Soviet Union as an example. In reality, the Soviet Union’s notorious ecological crisis and its lack of workers’ democracy demonstrate how little it has in common with the tradition initiated by Marx and Engels. As John Bellamy Foster demonstrated in Marx’s Ecology, Marx and Engels developed a profound ecological critique of capitalism and bourgeois ideas about “progress” that come at the expense of the environment.

Nevertheless, Ecosocialism is a useful introduction to the subject. Löwy provides short-term movement goals that oppose the logic of capital, and calls for broader social transformation to establish a democratically planned socialist society that puts people and the planet first.

Hannah Holleman is assistant professor of sociology at Amherst College, in Amherst, Massachusetts. This review was first published in International Socialist Review.