Militarized and profit-making approaches to climate emergencies and other crises pose a serious threat to environmental justice, civil rights and democracy 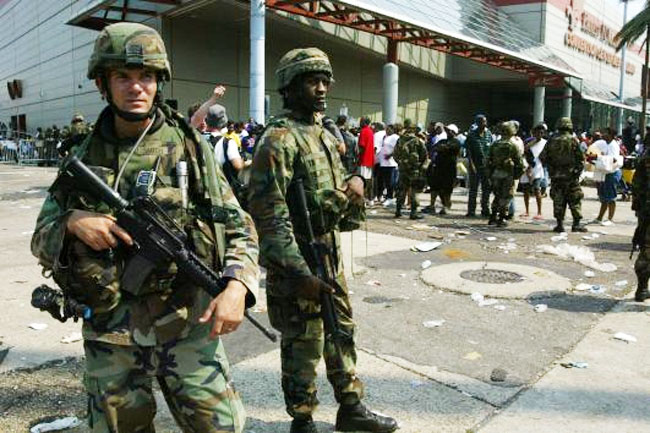 by Nick Buxton and Ben Hayes

As images from the aftermath of Hurricane Katrina are replayed around the world, they are still as shocking as they were ten years ago. Many of us watched in disbelief as we saw how the world’s richest and most powerful state seemed unable, then unwilling, to rescue its own citizens – sending in trigger-happy troops who shot at the hurricane’s victims instead. Coming so soon after the Iraq war, the hapless Bush administration appeared unable to respond to any crisis without resort to the military. As the waters receded, America’s deep-seated racism and inequality was laid bare for the whole world to see.

Could it happen again today? To an important extent, the US government’s response to Hurricane Katrina has become a textbook example of ‘how-not-do-it’ for crisis managers around the world. Embarrassed by their failure, the US government carried out a significant reorganisation of the maligned Federal Emergency Management Agency (FEMA). When Hurricane Sandy caused carnage in 2012, their response – while still wanting in places – was more widely praised.

But the structural inequality and institutional racism that underpinned the Bush administration’s response is still there, a fact that President Obama noted on his visit to New Orleans this week. Moreover, the already bloated military and security complex that reflected these power relations has expanded enormously since Katrina – and is now using the spectre of climate change to grab yet more public resources.

Two years after Katrina, in 2007, the Pentagon released its first major report on climate change, warning in no uncertain terms of an “age of consequences” in which, amongst other things, “altruism and generosity would likely be blunted.” This was followed up a year later by an EU security report that talked of climate change as a “threat multiplier” that “threatens to overburden states and regions which are already fragile and conflict prone.” It warned that this would lead to “political and security risks that directly affect European interests.” Over the next few years, the national security strategies of the countries across the global north would be rewritten to offer the same self-interested and dystopian vision.

In the aftermath of the financial crisis and the so-called Arab Spring, the dystopian thinking of powerful elites has had to face up to increasingly ‘complex emergencies’ as the reliance of modern societies on global supply lines, industrial food production, transnational infrastructure and high-tech communications have exposed and exacerbated existing vulnerabilities, by ensuring that disaster in one place now reverberates far beyond the initial point of contact. Climate change, the narrative goes, will add more fuel to the fire.

However, in one sense, the accuracy of the predictions doesn’t really matter. On the anniversary of Hurricane Katrina we only have to look at how the humanitarian crisis on Europe’s doorstep and in its borderlands is unfolding. In Calais, we see a humanitarian emergency being treated as a security issue as the British government has pledged £22 million pounds on fences, police and dogs to keep out refugees fleeing war and torture. Both Hungary and Bulgaria announced this week that they were deploying troops, so-called “border hunters,” to prevent refugees entering the country from the former Yugoslavia.

Further afield in Brazil, there were reports this summer of authorities mobilizing troops to defend water infrastructure amid an ongoing drought in the megacity of São Paulo. Absent credible plans to conserve water and tackle some of the root causes of water scarcity such as deforestation, journalists reported that approximately 70 soldiers were involved in exercises to prepare the utility for an uprising, with 30 men with machine guns stationed in the facility’s canteen.

And we can already see how the national security planners are factoring protests against inequality and social injustice into the new crisis management paradigms: by trying to predict complex emergencies and social unrest. Today, the UK’s National Risk Register, for example, lists “public disorder” and “disruptive industrial action” as among the most severe and likely security threats facing the country. Crucially, by casting these issues as security threats rather than social justice issues, a very different medicine is proscribed. Moreover, the authorities have greatly increased their powers to deal with these so-called ‘threats’. Staying with the UK, the Civil Contingencies Act 2004 permits ministers to introduce “emergency regulations” without recourse to parliament and “give directions or orders” of virtually unlimited scope, including the destruction of property, prohibiting assemblies, banning travel and outlawing “other specified activities”. Again, this is the shape of emergency planning the world over.

Dystopian preparations by the state are reflected in the corporate arena. Where we see a future climate crisis, many companies see only opportunity: oil firms looking forward to melting ice caps delivering new accessible fossil fuels; security firms touting the latest technologies to secure borders from ‘climate refugees’; or investment fund managers speculating on weather-related food prices – to name but a few. In 2012, Raytheon, one of the world’s largest defense contractors, announced “expanded business opportunities” arising from “security concerns and their possible consequences,” due to the “effects of climate change” in the form of “storms, droughts, and floods”. The rest of the defense sector has been quick to follow.

The implications of a militarized and profit-making approach to climate adaptation and crisis-management are very disturbing – and need to be taken more seriously by anyone concerned with environmental justice, civil liberties and democracy.

Ultimately, a security-led approach to climate change and complex emergencies not only fails to address the fundamental causes of these crises – it will often exacerbate them. Worldwide the increased focus on food security is already driving increased land grabbing. The diversion of resources into military spending and strategies is preventing much needed investment in crisis-prevention and tackling the root causes of human insecurity. Given that climate change will impact disproportionately on the poorest, a militarization of our response merely compounds a fundamental injustice – that those least responsible for climate change will be most affected.

In this sense, Hurricane Katrina was a watershed moment and a warning to us all as it laid bare the way in which democratic states would become more preoccupied with the threat posed by their own citizens – instead of taking the bold steps needed to protect current and future populations. Transformed by 9/11, it is this vision of ‘Homeland Security’ that is shaping future responses to emergency – and transforming climate change from a social justice issue to a national security one. We the people have to combine our actions to end worsening climate change with a transformation of the institutions that seek to respond to its impacts.

Ben Hayes and Nick Buxton are editors of the forthcoming book, The Secure and the Dispossessed: How the military and corporations are shaping a climate-change world (November 2015) available for pre-order at Pluto Press.

This article was originally published in the independent online magazine Open Democracy, under a Creative Commons Attribution-NonCommercial 4.0 International licence.