Industry-funded research at one of Canada’s largest  universities has been used to cover up the overwhelming scientific evidence that asbestos is deadly.

Kathleen Ruff is founder of the human rights website RightOnCanada.ca and Senior Advisor on Human Rights to the Rideau Institute. This article, which first appeared in rabble.ca, is published here with her permission. 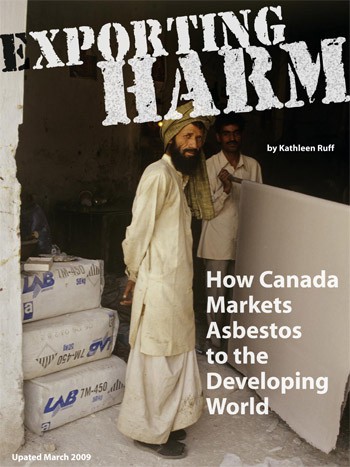 This report by Kathleen Ruff documented Canada’s role in selling asbestos to the developing world, long after most countries had banned it

ASBESTOS: A CONTINUING FAILURE OF ETHICS BY MCGILL UNIVERSITY

Many people are shocked when they learn that the asbestos trade is thriving today. It’s true of course, that we in the privileged world no longer use asbestos. In the global South however, particularly in Asia, asbestos use is increasing. For the past twenty years, two million tons of asbestos a year is being put in homes and schools to cause a public health catastrophe for decades to come.

Many people would perhaps be shocked to know that Canada, and in particular, McGill University, deserve a good part of the credit for the continued survival of the asbestos industry in spite of the overwhelming scientific evidence of its deadly nature.

Quebec was the centre of asbestos mining in Canada and one of the biggest asbestos exporters in the world. In September 2012, the newly elected Parti Québécois government cancelled a government loan to the Jeffrey mine and the industry is now shut down.

In every country where asbestos has been used, it has left behind epidemics of asbestos-related deaths. Asbestos continues in Canada to be the biggest cause of death from occupational disease. In Quebec, over 70 per cent of such deaths are due to asbestos.

By the 1960s, the Quebec Asbestos Mining Association (QAMA), run by Johns-Manville and other asbestos multinationals, knew they faced extinction. The evidence that asbestos caused deadly diseases, such as asbestosis, mesothelioma and other cancers, was simply indisputable.

QAMA 1965 records report how it was seeking an “alliance with some university, such as McGill, so that authoritative background for publicity can be had.” In 1966, following the tobacco industry’s example, QAMA set up a front organization: the Institute of Occupational & Environmental Health (IOEH) in Montreal. It was totally financed and controlled by the asbestos companies and its purpose was to be “independent of any other institution — university or governmental — so that its policy can be determined by the needs of the industry.”

Professor J.C. McDonald of McGill’s Deptartment of Epidemiology was given a million dollars by the IOEH to carry out research on Quebec asbestos miners, the biggest study ever undertaken and therefore extremely influential.

McDonald and his McGill colleagues admitted that the technique they used (midget dust impinger) to estimate asbestos fibre levels in the mines was an outdated, inaccurate technique, only 13 per cent better than a random guess.

In fact, using this faulty technique, McDonald’s results showed that exposure to chrysotile asbestos gave protection against cancer. Recognizing this result was ludicrous, McDonald arbitrarily deleted all data that showed asbestos as protective to in order to show different results.

McDonald stated that his research showed that chrysotile asbestos was essentially “innocuous” except at “astronomically” high exposure levels. Workers could therefore be exposed to high levels of asbestos fibres (45 fibres per cubic centimetre of air) without adverse affect to health, said McDonald. The UK limit at the time was 2 f/cc. Today it is 0.1 f/cc.

McDonald’s results supported the asbestos industry’s position, which claimed that asbestos deaths had been caused by astronomically high exposure levels of the past and, since such conditions no longer existed, chrysotile asbestos could be safely used.

The data on which McDonald based his findings has never been made available. No independent scientist has replicated them; every reputable scientific body in the world has rejected them.

But his findings were gold for the asbestos industry and are still used today to promote asbestos use and to deny compensation to asbestos victims.

Canadian taxpayers contributed enormously to the industry’s successful marketing of asbestos in developing countries. The government gave millions of dollars to the asbestos lobby and allowed it to put the Government of Canada emblem on its materials.

McDonald testified at national and international regulatory hearings to oppose stricter controls and bans on asbestos, citing his research without disclosing that the asbestos industry had financed it.

In 1972, alongside asbestos industry executives, McDonald urged a US regulatory agency (OSHA) to reject stricter exposure standards, sought by unions and the US National Institute for Occupational Safety and health. In testifying, Professor McDonald stated: “I do not work, nor am I associated with any asbestos producer or manufacturer.”

This was categorically untrue.

In 1998, McDonald was Canada’s scientific adviser at a World Trade Organization tribunal when Canada, on behalf of the asbestos industry, sought to remove the right of countries to ban chrysotile asbestos.

McDonald argued that the WTO should ignore the evidence of other scientists and rely on his research, as it was “the biggest scientific study of chrysotile workers.” He failed to mention that it was financed by the asbestos industry.

In one of the rare cases where the WTO ruled in favour of health protection, not corporate interests, the tribunal dismissed Canada’s case.

The review was tainted with bias and misinformation. Before it even began, McGill made statements exonerating McDonald. The Dean of Medicine stated he expected the complaint would be dismissed, saying: “Professor McDonald is widely considered a pioneer in the demonstration of the health hazards of asbestos.”

As well as bias, this statement is utterly false. McDonald is known around the world as a leading denier of the health hazards of chrysotile asbestos.

The Dean then asked McGill’s Research Integrity Officer, Dr. Fuks, for advice, saying that while the review had found no improprieties, “the Faculty does not currently have all required records and data in hand to assess definitively in regard to research integrity.”

Dr. Fuks failed to find the missing data, but dismissed the complaint anyway, praising McDonald’s research as having “led to the near complete disappearance of the asbestos industry in the developed world and the universal recognition of the toxicity of the product.” He recommended that McGill hold a conference on asbestos.

This statement from McGill’s ethics officer is extraordinary. It is utterly false.

McDonald’s research has played a major role in promoting use of asbestos and in denying its toxicity. In May 2013, the global asbestos lobby used McDonald’s research in lobbying at the Rotterdam Convention conference to defeat the listing of chrysotile asbestos as a hazardous substance.

The complaint to McGill specifically raised the issue of McDonald’s denial and non-disclosure of industry funding at regulatory hearings around the world. Dr. Fuks assiduously refused to address the issue and excluded this evidence from his report, while claiming that McDonald disclosed his industry funding “in the non-scientific setting.”

As evidence, Dr. Fuks cited a 1975 CBC Montreal interview. This was extraordinarily deceptive on Dr. Fuks’ part. The Quebec media knew the asbestos industry was financing McDonald’s research and simply asked how much:

CBC: The asbestos industry is now contributing some financial assistance to the study. How much is the industry contributing?

McDonald did not disclose the industry funding; the CBC already knew and stated it as a fact.

McDonald’s conduct seems to be in clear violation of McGill’s Conflict of Interest Guidelines. These Guidelines do not seem to be taken seriously by McGill, however. Over the past 20 months McGill has never referred to these Guidelines and has conveyed a strong message that McGill condones or is indifferent to academics not disclosing industry financing.

McGill held its conference Asbestos: Dialogue for the Future on October 1. No one answered the damning evidence put forward by myself, Asbestos: A Failure of Ethics by McGill University and by Professor Egilman, The Past is Prologue, Universities in Service to Corporations: The McGill-QAMA Asbestos Example.

A conference is wonderful, but it is not a substitute for doing the right thing. It’s time for McGill to do the right thing and hold an independent inquiry on its asbestos history.