Book review: A powerful polemic against capitalism’s planetary destruction, and an engaging look at the degrowth movement 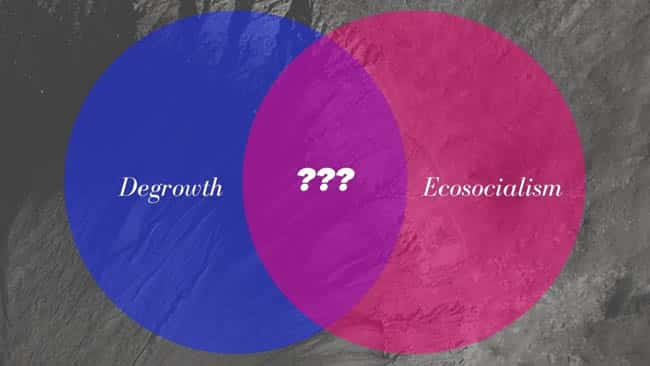 Matthias Schmelzer, Andrea Vetter and Aaron Vansintjan
THE FUTURE IS DEGROWTH
A Guide to a World Beyond Capitalism
Verso, 2022 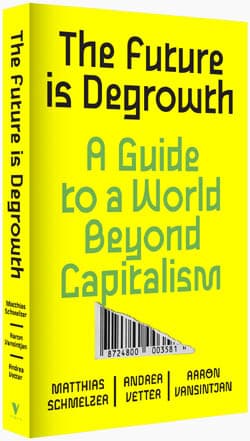 The Future is Degrowth by Matthias Schmelzer, Andrea Vetter and Aaron Vansintjan is a powerful polemic against capitalism’s planetary destruction, and an engaging look at the degrowth movement.

Karl Marx said this compulsion flowed from competitive accumulation. Capitalists compete with each other to maximize their profits, and are forced to plough back into production most of the wealth they extract from workers. The compulsion to accumulate arises from the competition faced by capitalists. Unless they constantly innovate and develop production methods, they face losing out to their competitors—resulting in possible bankruptcy.

This traps the capitalists—if they do not endlessly grow their capital, they will disappear. The laws of capitalist production, Marx said, are “felt by each individual capitalist, as external coercive laws.” They compel them “to keep constantly extending” their capital, to preserve it. The only way to extend capital is “by means of progressive accumulation.”

So, capitalism is a system of endless growth that leads to the natural world being systematically degraded. Production relies on a relationship between the natural world and human labour, and growth requires labor to be exploited.

The drive for growth destroys “the original sources of all wealth—the soil and the laborer,” Marx said. Many environmental activists instinctively grasp this concept. The slogan, “You cannot have infinite growth on a finite planet,” is popular within the movement. It epitomizes the sense that capitalism operates beyond the means which the planet can provide.

In the last decade this has led to the development of the “degrowth movement”. It is a movement with a multitude of strands. But it’s one that almost universally stands for social and environmental justice, equality and a system that sustainably organizes the impact of human society on the planet.

Schmelzer, Vetter and Vansintjan argue that, contrary to popular myth, the vast majority of those who argue for degrowth start from the need to build a world of equity and equality. Degrowth is not about austerity and a lack of development for the majority. This clarification is important.

Working class people have already suffered under austerity. And many socialists and trade unionists are concerned that ordinary people will, through “degrowth” and cutting back, be made to pay for capitalism’s destruction of the environment.

But the authors emphasize that proponents of degrowth “are fundamentally critical of growth, capitalism and industrialism, and want to overcome other forms of domination”. They “advocate a radical restructuring of the economy in industrialized countries, requiring the selective downscaling of certain industries and production.” At the same time this means expanding public services like health, education and transport.

The book is loosely split into three parts. The first explains what capitalist growth is. Here the authors refer to various thinkers, but it is worth noting that they draw heavily on Marx’s ideas on accumulation. The second part explores how a growth-based economy leads to environmental destruction, exploitation and oppression. Finally, the authors explore their vision for a post-capitalist, degrowth society.

Such a society has undergone a “democratic process of transformation” and “enables global ecological justice” which “transforms and reduces its material metabolism.” Such a society would see the strengthening of “social justice and self-determination” and would strive “for a good life for all, under the conditions of this changed metabolism”. The degrowth society would redesign “institutions and infrastructure so that they are not dependent on growth and continued expansion for their functioning.”

Clearly, socialists would agree with these aims. In particular I was impressed by the authors’ use of the concept of “metabolism” to explore how societies related to the world around them. It’s an approach used by Marx and has been developed by Marxist writers such John Bellamy Foster to show how capitalism has broken the links between humans and nature, which enabled societies to function sustainably.

Expanding on these three fundamentals, the authors show how a degrowth society could function and what this would mean for those living in a degrowth world. It would be one “orientated towards overcoming the distinction between production and reproduction.”

Unfortunately, the biggest problem here is that the authors do not offer a viable theory of change. The basis for their degrowth society rests on two visions. One is the construction of “nowtopias.” They might include “initiatives such as community-supported agriculture, communing, solidarity/cooperative/community economies, peer-to-peer production, platform cooperatives, alternative economies and sharing economies”.

The authors quote, with enthusiasm, the slogan of the Industrial Workers of the World to “build a new world in the shell of the old.”

While nowtopias such as cooperatives can offer alternatives, they are islands within capitalism. They remain trapped by the market’s logic of competition and production for profit, and their inhabitants or workers are reliant on external forces. Crucially, capitalism can organize to destroy them.

We can learn a lot from such experiments, but we will not be able to simply expand such operations until they have overwhelmed capitalism. One decisive reason for this is the capitalist state.

The capitalist state, which includes the police, the army and institutions such as the civil service and legal system, exists to suppress any radical attempts at change. In the last resort, the state has armed bodies that can arrest protesters, kill revolutionaries and break up demonstrations and strikes.

Why is this important? The answer lies in the authors’ own vision of a future, post-capitalist society. This would be one where wealth was redistributed to satisfy human need and the economy was rationally organized in the interests of people and planet. And where inequality was challenged directly.

But the capitalist state exists principally to prevent this transformation. And understanding the state’s role allows radicals to identify social forces that can defeat it.

Instead, the book avoids the argument. For example, the authors’ “prerequisite” for their post-capitalist society requires the restructuring of “all relevant social institutions in such a way that they can function without economic growth.”

One part of this would be transforming financial institutions—which, the authors say, would be democratically managed instead of “being controlled by the owners of capital”. Financial markets and institutions would have to be “radically” shrunk and placed under democratic control. The rich would be taxed “out of existence.” Few radicals would disagree with these aims. But, without an explanation of the social forces that can challenge the state, these aims are utopian.

For Marxists the social force to drive through such change is the working class. This is because of the role of workers’ labor in producing surplus value, which is the basis of capitalist profit and essential to the functioning of society.

While the authors understand the role of workers in producing value, they do not attribute any revolutionary agency to their class.

Tantalizingly, the authors mention some ideas normally associated with revolutionaries. They refer to “dual power,” an idea that goes back to the Russian Revolution of 1917. For Marxists, it means the moment in a revolution when there’s the “existence of two governments.”

For the authors, however, dual power is merely “the effort to build movements and organizations that have the capacity to make demands from the state but that do not fully rely on the state to function.”

This is wholly inadequate. Dual power arises in a revolutionary process because ordinary people create organizations that are a direct challenge to the capitalist state. They begin to take on the organization of society, replacing the existing state’s functions.

These organizations are the product of mass revolution from below. In the Russian Revolution of 1917, they were called soviets. In other revolutions they were known as workers’ councils. Such bodies are crucial to the vision of a sustainable world. That’s because they are simultaneously organizations that function as democratic extensions of workers’ power and can organize society based on a completely new economy.

What might this economy look like? I would argue that it would be an economy based on democratic planning from below, rather than growth for the sake of growth. It would see the “associated producers,” to use Marx’s phrase, rationally organizing production in a way that manages society’s metabolism with nature.

While the authors briefly mention democratic planning, it is frustrating that they do not see it as arising out of a mass movement from below. Such revolutions are important because, in partaking in such collective efforts, the workers who make the new world will transform their ideas. It’s another reason why mass struggles are important and why it is not enough to build utopian islands within capitalism’s oceans.

The absence of class struggle from this book is a real weakness because it downplays the role of ordinary workers in transforming the world in their own, collective, interests. I hope that recent uprisings in Sudan, Sri Lanka and Iran—as well as the return of strikes in Britain—may allow degrowth thinkers to place workers’ struggles more centrally in their work.

Martin Empson blogs at Resolute Reader. This review was first published on the SWP (UK) website.