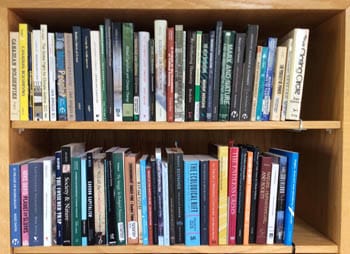 Guillaume Blanc
THE INVENTION OF GREEN COLONIALISM
Polity Books, 2022
Africa’s national parks were created by European imperial powers by forcibly evicting thousands of people from lands where they lived for centuries. Today, international conservation organizations continue to impose coercive models of “nature protection,” displacing local people, restricting access to resources, and criminalizing the use of the land. They are maintaining and extending a new type of imperial oppression: green colonialism.

Alan G. Morris
BODIES AND BONES
How South African Scientists Studied Race
Wits University Press, 2021
When an ancient human skull was discovered in South Africa in 1913, scientists promptly labelled “Boskop Man” a degenerate species, inferior in every way to Europeans. Morris’s history of anthropology in southern Africa shows that the supposed science was permeated by racist assumptions that justified the suppression of native populations and contributed to the establishment of apartheid.

Keith Seifert
THE HIDDEN KINGDOM OF FUNGI
Exploring the Microscopic World in Our Forests, Homes, and Bodies
Greystone Books, 2022
Yeast, lichens, slimes, and molds have evolved and adapted over millions of years, and they affect every aspect of the web of life. Canadian mycologist Keith Seifert traces the intricate connections between fungi and all life on Earth, showing how these remarkable microbes make life possible and at the same time kill over a million people every year. To live in harmony with nature, we must understand this hidden world.

Marci R. Baranski
THE GLOBALIZATION OF WHEAT
A Critical History of the Green Revolution
University of Pittsburgh Press, 2022
Norman Borlaug won a Nobel Prize for developing new seeds that increased production, but his seeds required expensive chemical fertilizers and irrigation, available only to wealthier farmers, leading to large-scale monocultures that replaced traditional farming practices. Baranski shows that the Green Revolution, by focusing on narrow technological methods, increased inequality and drove small farmers off the land.

Pedro Ross
HOW THE WORKERS’ PARLIAMENTS SAVED THE CUBAN REVOLUTION
Reviving Socialism after the Collapse of the Soviet Union
Monthly Review Press, 2022
Despite the collapse of its largest trading partner and a period of extreme privation, Cuba maintained its high life expectancy, low infant mortality, and universal access to health and education, preserving many of the gains of the revolution. The recovery was due to a massive grassroots campaign involving tens of thousands of meetings that mobilized the people to revolutionize nearly every aspect of life in Cuba. A rare, moving, on-the-ground account of a society mobilized from below, buttressing the Revolution when it was under maximum stress.

Karl Marx
CRITIQUE OF THE GOTHA PROGRAM
PM Press, 2022
A new annotated translation of Karl Marx’s 1875 essay shows the full emancipatory scope of his notion of life after capitalism. This edition includes an extensive introduction by Peter Hudis, interpreting Marx’s arguments from the perspective of Marxist-humanism.