World is further away from ending hunger, food insecurity and malnutrition

The number of people affected by hunger globally rose to as many as 828 million in 2021, an increase of about 46 million since 2020 and 150 million since the outbreak of the COVID-19 pandemic, according to a United Nations report that provides fresh evidence that the world is moving further away from ending hunger, food insecurity and malnutrition . 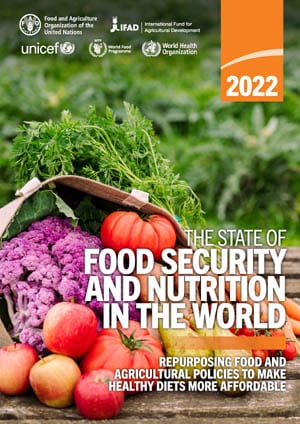 The 2022 edition of The State of Food Security and Nutrition in the World report presents updates on the food security and nutrition situation around the world, including the latest estimates of the cost and affordability of a healthy diet. The report also looks at ways in which governments can repurpose their current support to agriculture to reduce the cost of healthy diets, mindful of the limited public resources available in many parts of the world.

The numbers paint a grim picture:

As this report is being published, the ongoing war in Ukraine, involving two of the biggest global producers of staple cereals, oilseeds and fertilizer, is disrupting international supply chains and pushing up the prices of grain, fertilizer, energy, as well as ready-to-use therapeutic food for children with severe malnutrition. This comes as supply chains are already being adversely affected by increasingly frequent extreme climate events, especially in low-income countries, and has potentially sobering implications for global food security and nutrition.