Fighting back against extractivism, false solutions, and social and climate abuse around the world

The COP26 meeting in Glasgow, Scotland must be added to a long series of failures of UN-convened international meetings to meet the urgent social and ecological needs of a world threatened by catastrophic climate change. These failures include the lack of truly binding commitments to the steps needed—such as phasing out all fossil fuels and fossil fuel subsidies–to hold global temperature rise to 1.5 degrees C. This failure condemns huge numbers of people, mostly in the global south, to critical water shortages, dangerous heatwaves, and many other damaging social and environmental effects. Despite these disastrous implications, wealthy countries continue to deny money for compensating communities suffering loss and damage due to climate change, nor climate finance to help poorer countries, thereby condemning those least equipped to cope with the climate crisis to unsustainable levels of debt.

The many loopholes in the COP26 agreement allow fossil fuel corporations to focus even more on carbon offsetting by rich countries, rather than real zero emissions targets. These carbon offsetting schemes have been pursued for some time now without adequate environmental and human rights protection measures, thus further endangering Indigenous peoples and communities who risk being evicted from their lands and livelihoods to make way for these harmful schemes. The failure of COP26 raises the question of who can a beleaguered humanity—especially in the global south—turn to for meaningful action toward mitigation and regeneration of human and non-human communities.

Movements such as the Sunrise Movement and Extinction Rebellion, as well as alternative grassroots international meetings, will doubtless continue to play an important role. But there are many efforts that have been engaged in concrete and prefigurative resistance and reconstructive actions well outside of the sphere of petitioning governments for change, actions oriented toward expanding the values and aims of climate justice. These actions have generally received little acknowledgment or notice, even in alternative media. 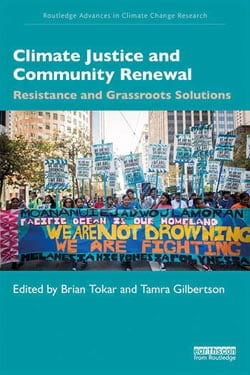 A recent book edited by Brian Tokar and Tamra Gilbertson, Climate Justice and Community Renewal, goes a long way to filling this gap in awareness and grounds for active social hope. It powerfully portrays an increasingly diverse, robust and radical global climate justice movement. Brian Tokar is an activist and author, a lecturer in Environmental Studies at the University of Vermont, and a faculty and board member of the Institute for Social Ecology. He is the author of Toward Climate Justice: Perspective on the Climate Crisis and Social Change, as well as the author/editor of a number of previous books and articles on climate change, climate justice, and social movements. Tamra Gilbertson is an activist, researcher, writer, and scholar, and a lecturer at the University of Tennessee. She is also Climate Change and Forest Policy Advisor for the Indigenous Environmental Network.

In his introduction Tokar summarizes a convergence of Indigenous, environmental justice activists across North America, and activists with roots in the “alter-globalization” movement of the late 1990s; several of these groups have been characterized as key dimensions of an environmentalism of the poor and dispossessed. Tokar writes:

“While various organizational formations have come and gone over the past decade or two of intensive activity, climate justice advocates are united by a profound understanding of the disproportionate impacts of global climate disruptions on those who have contributed the least to excess emissions of carbon dioxide and other greenhouse gases. They also share a common analysis of the shared institutional and political roots of the climate crisis and the numerous other injustices faced by peoples around the world, with origins in the centuries-long historical legacy of colonialism. By highlighting the leadership, priorities, and strategic insights of people from communities at the front lines of climate impacts, as well as those confronting extreme forms of resource extraction, climate justice advocates have helped to sharpen the international scope of climate action in all its forms.”

The book tells the stories of resistance to extractivism, false solutions, and social and climate abuse in varied contexts around the world. Stories relate resistance to Shell and other companies in Africa; to Muskrat Falls in Labrador, where an unusual coalition of Innu, Inuit, Métis, and Euro-Canadians continue to oppose an ongoing megadam project; to the Brazilian state of Espírito Santo, where the Quilombola community continues to resist oil company destruction of forests and replacement by ecologically and socially destructive genetically modified eucalyptus plantations.  There is a report of frontline forest resistance in India, where alliances of indigenous forest-dwelling peoples and other forest movements against coal mining, land grabs, and deforestation has begun to open spaces of non-state and anti-capitalist struggle. Climate justice resistance movements include the Republic of the Marshall Islands, where confronting climate-change-induced sea level rise has generated a movement for decolonization and recognition of Indigenous sovereignty and self-determination.

The book includes a summary of climate justice activism in the US, where direct action against fossil fuels has built increasing collective action and solidarity through actions in the coal fields in Appalachia, in the Lower Ninth ward in New Orleans following Hurricane Katrina, to the No Keystone and NODAPL anti-pipeline actions at multiple sites; the Amazon state of Acre, Brazil, where Indigenous peoples have opposed the UN and World Bank backed Reducing Emissions from Deforestation and Forest Degradation (REDD) program of “sustainable forest management” has resulted in deforestation, the destruction of Indigenous territories, and the decimation of the territorial rights of Indigenous peoples. A broad summary of climate justice activism in Africa highlights the emergence of the Pan African Climate Justice Alliance (Pacja), which has brought together many activists and groups to address deforestation, agriculture, and food security beyond the limits of UN climate resolutions and the lagging and the lagging actions of the South African government, toward recognizing the need for “a radical shift away from capitalism.”

The book further examines instances of community renewal that moves beyond resistance to concrete reconstructive efforts. Such efforts are described in Puerto Rico, where a community-based agroecological movement has helped farmer recovery and food sovereignty post-hurricane Maria; and in Cochabamba, Bolivia, where rainwater harvesting as a response to water privatization has not only mitigated water scarcity but is challenging the status quo of state-controlled water governance regimes. In Detroit, MI, sustained organizing by Boggs Center activists and students of urban agriculture at the University of Detroit has resulted in a vast network of resilient urban farms and gardens, as other groups have worked to close an incinerator and increased access to safe, affordable water. In Turtle Island (North America), the Indigenous Environmental Network brought together many tribal voices over the course of numerous outdoor gatherings to compile and offer Indigenous Principles of Just Transition.

In Bonn, Germany, a 2017 forum parallel to COP23 brought together activists from Via Campesina and It Takes Roots to highlight global feminist struggles against capitalism, contrasting Indigenous political economies vs. “green” capitalism, and food sovereignty and agroecology vs. capitalist agriculture. In Groningen, the Netherlands, Hamburg, Germany, Oxford, England and other members of the Climate Alliance of European Cities, local governments are tackling the issue of how to realize the potential of local climate action by embedding these actions in the life-world of citizens so that they become legitimate and a priority. In various areas in the northeastern US, an alliance for energy democracy is working to create energy systems that are renewable, equitable, accountable, and owned and controlled locally, utilizing community-share solar models to build popular power outside the governing institutions of capitalism, according to the revolutionary framework of “dual power.”

In her conclusion, Tamra Gilbertson identifies five broad areas that can help in concert to address climate change: fossil fuels and energy; education and debate; the state, labor, and the elite; food sovereignty and agriculture; and solidarity, support and organizing. Concerning the need for a rapid phase-out of fossil fuel extraction, she calls for not only conventional policies such as an end to fossil fuel subsidies, increased regulation, and investment shifts from fossil fuels to renewables, but increasing demands to shift funding from military budgets to the funding of climate mitigation and just transition policies. She further calls for subsidies to be distributed to community-led initiatives operating from bottom-up energy assessments that focus on smaller, locally-owned and decentralized forms of providing energy.

Gilbertson also lifts up the importance of boosting debate and education on environment, climate, and social justice in a way that highlights feminist perspectives, including feminist critiques of science, while expanding educational opportunities for women in the developing world. In a passage I would underscore, she writes:

“Changing the way people understand and discuss environmental and climate justice starts with education not only in the classroom but in how we think and speak about nature, our cities, regions, and communities. Opening multiple spaces for shared debate and exchange, as well as education on environmental climate justice, is a critical part of this path and perhaps the greatest hurdle we face.”

Gilbertson reiterates a call for the return of a broad range of regulatory instruments, aa well as increased public investment for cleaner energy infrastructure. She emphasizes, however, that public incentives and even public ownership mean little without public control, which is severely lacking in current governance models. She also calls for more concerted legal action to support communities impacted by polluting and extractive industries, especially in rural areas where these industries are often located.

Food sovereignty struggles become a crucial site in multiple ways of positive and impactful change away from fossil-fuel dependent agribusiness.  Communities struggling for local production, decolonizing food toward small-scale, organic, organic, pesticide-free production and seed sharing have important knowledge to share. Again the work of women is central: women produce, prepare, provide, store, and manage food and family nutrition almost exclusively through unpaid labor both in the Global North and the South. Women pass on to their children vital knowledge of seed genetic diversity for food, medicine and cultural uses.

Finally, Gilbertson underscores the need to broaden our organizing and solidarity networks beyond mainstream NGOs to encompass more of the voices from Indigenous and forest communities defending their land and traditional practices and territorial rights. It is especially crucial to form networks that will help move beyond mitigation policies embedded in the carbon market. Giving voice to an increasingly radicalized climate movement, Gilbertson writes:

“Numerous initiatives, networks, organizations, and popular movements exist today—all around the world, we are building diverse climate justice movements. There are no shortcuts around the difficult work of political organizing and alliance-building. There are no back roads or techno-fixes around the historical, economic, and international policies that have created climate change. No aspect of the debate on climate change can be disentangled from discussions of colonialism, racism, gender, women’s rights, imperialism, exploitation, land grabs, agriculture and technology. Capitalism will never address these critical issues because the struggle for environmental and climate justice has to be part of the larger fight for a more just, renewing, and commoning world.”

Climate Justice and Community Renewal grounds a promising vision of what may be accomplished through authoritative reports and analyses of what is already happening in many areas around the world. The book also suggests the potential of a strengthening of international climate justice efforts and their broadening and convergence as a “movement of movements” that can effectively address the most urgent threats of our time.

Bob Spivey is currently completing a book on social ecology and climate justice.