The normally-conservative IPCC gives us eight reasons to make action against climate change a top priority. 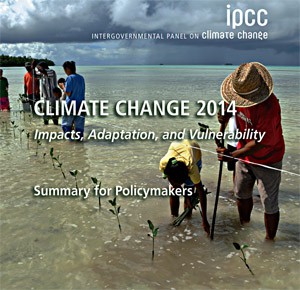 If you still need a reason to join in the climate protests this coming weekend, here are eight.

The Intergovernmental Panel on Climate Change (IPCC) is a conservative body. It works by consensus, so its reports reflect the lowest common denominator − the least radical assessment of the evidence. As a result, since its formation in 1988 reality has almost always been worse than the IPCC’s worst case scenarios. Its descriptions of the climate crisis are dispassionate and emotion-free, almost boring.

So when the IPCC’s latest report on Impacts, Adaptation and Vulnerability (pdf) talks about “severe, pervasive, and irreversible impacts,” that’s equivalent to saying that we are bound for climate hell if we don’t act.

And when the same report lists eight key “RFCs” − Reasons For Concern about climate change, we should view them as RTBWATAFs  − Reasons To Be Worried And To Act Fast.

To be included in this list, a risk must involve “high hazard or high vulnerability of societies and systems exposed, or both.” In particular: “Identification of key risks was based on expert judgment using the following specific criteria: large magnitude high probability, or irreversibility of impacts; timing of impacts; persistent vulnerability or exposure contributing to risks; or limited potential to reduce risks through adaptation or mitigation.”

These Reasons for Concern were all “identified with high confidence” —

When the IPCC is concerned, the rest of us need to act. Now.