A brilliant new science fiction novel explores the social consequences of introducing a technological fix for hunger into a world where profit makes the rules. 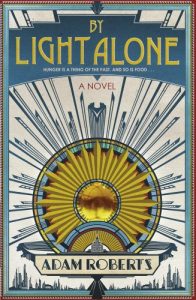 Progress under capitalism, Karl Marx wrote, resembles “that hideous, pagan idol, who would not drink the nectar but from the skulls of the slain.” Changes that ought to make life better often produce new social, economic, and environmental disasters.

The Green Revolution is a case in point. In the 1970s and 1980s, new agricultural techniques, including new chemicals and seeds, led to dramatic increases in food production. But the Green Revolution also increased rural inequality, enabling large commercial farms to grow while impoverishing a multitude of small farmers who couldn’t afford the new inputs. Green Revolution chemicals have poisoned rivers and its irrigation techniques have depleted aquifers. The gains in food production have been overwhelmed by social and environmental losses.

In the brilliant science fiction novel By Light Alone, Adam Roberts takes that experience a step further, exploring the consequences of a introducing a techno-fix for hunger in a capitalist world.

In the near future on Earth, a simple one-dose drug enables human beings to directly absorb solar energy through their hair: food is no longer a requirement for life.

The result is not the new era of human freedom from want that the drug’s inventors expected, but even more inequality and oppression. The New Hair provides enough energy to sustain life, but pregnant women need additional energy to carry their pregnancies to term and to feed their babies until they are old enough for the drug to work.

“Bosses leverage their women’s desire to have babies into many years of grunt-hard work; the women do it to stockpile enough protein powder to see them through pregnancy and breast feeding….

Instead of ending poverty, the combination of New Hair and capitalism has produced a new definition of subsistence: for those who can’t find work it means nothing at all, for the rest not much more. While hundreds of millions of women slave to accumulate milk powder, the ultra rich vacation at ski resorts that feature slopes made with real ice cream.

In the first part of By Light Alone, we see this world through the eyes of a wealthy couple, George and Marie, who have never doubted that extreme affluence is theirs by right. They live what George comes to call a “Rapunzel’s tower” life, isolated from and ignorant of the basis of their privileges. That isolation is shattered when their ten-year-old daughter disappears, taken by someone who vanishes into rural Turkey with the child, making no ransom demand. Nothing in their privileged lives has prepared them for a crisis that money can’t solve.

A shorter central section gives us the perspective of a young girl who seems to be their kidnapped daughter, much changed by living on light for a year in a remote Kurdish village. Returned to New York, she is astonished by the abundance. “The thing about the fridge was the way it was just there, all day and all night, and always full, and always accessible to anybody who just walked up to its door.” But her astonishment quickly becomes acceptance, as she adopts the attitudes of entitlement and class superiority that characterize the less-than-one-percent.

The last third of the book shifts focus away from the obscenely rich to the poor whose misery makes obscene wealth possible. The central figure is Issa, a young woman who escapes the virtual slavery that is most women’s lot and joins a growing movement of people for whom “light alone” is not enough. “This is the great war of our age,” she learns. “The wealthy have the hardware, and they are ruthless. But we have the numbers and justice belongs to us.” In the final chapters, millions of unarmed people with nothing to lose unite in a desperate mass assault on the bastion of wealth and privilege.

This brief summary doesn’t begin to do the book justice, but to say more I’d have to reveal too much of the plot. I’ll just say that By Light Alone was a can’t-put-it-down experience for me — psychologically and socially insightful, well written, and just plain exciting to read.

The fact that it also illustrates the futility of techno-fixes for capitalism’s crimes is a bonus.

By Light Alone was shortlisted for Best Novel of 2011 by the British Science Fiction Writers Association. I think it should have won.