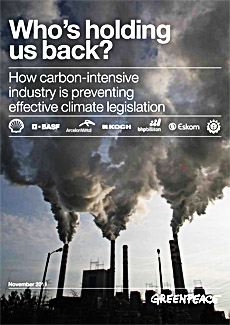 The corporations most responsible for contributing to climate change emissions and profiting from those activities are campaigning to increase their access to international negotiations and, at the same time, working to defeat progressive legislation on climate change and energy around the world.

These corporations – while making public statements that appear to show their concern for climate change and working with their own seemingly progressive trade associations like the World Business Council for Sustainable Development (WBCSD) – threaten to defeat urgent global progress on climate change and economic development for the 99% of the world’s population that desires both clean energy and clean air.

This report helps to demonstrate why decisive action on the climate is being increasingly ousted from the political agenda. Firstly we summarise the lack of action at a national level in several key countries to build the right preconditions to a global climate agreement, which stands in stark contrast to public opinion demanding change. Then, the report reveals through clear case studies how a handful of major polluting corporations such as Eskom, BASF, ArcelorMittal, BHP Billiton, Shell and Koch Industries, as well as the industry associations that they are members of, are influencing governments and the political process on climate legislation.

What the people want

A global poll in 2009 showed that 73% of people placed a high priority on climate change1, and a recent poll confirmed that global concern about climate change has risen since the Copenhagen climate summit in 2009, despite the ongoing global financial and economic crisis.

How the carbon-intensive corporations are holding us back

Carbon-intensive corporations and their networks of trade associations are blocking policies that aim to transition our societies into green, sustainable, low-risk economies. These polluting corporations often exert their influence behind the scenes, employing a variety of techniques, including using trade associations and think tanks as front groups; confusing the public through climate denial or advertising campaigns; making corporate political donations; as well as making use of the ‘revolving door’ between public servants and carbon-intensive corporations.

State of play – The European Union

Carbon-intensive companies and their apologists, such as BusinessEurope, Cefic and Eurofer and the Alliance for a Competitive European Industry, continue to block serious progress on climate policies.

State of play – The United States

South Africa is hampered in its efforts to supply clean, affordable, renewable energy for its people by the country’s state-owned electricity provider and its close links to the carbon intensive industry:

Canada is the only country in the world that signed and ratified the Kyoto Accord and then openly announced it would not meet its commitments. Canada is also the only country to decrease its mitigation emissions pledge for 2020. In addition, the Canadian government provides over $1.3 bn Canadian dollars in handouts to the oil industry every year, despite calls from within the Department of Finance to end these subsidies and committing to phase out fossil fuel subsidies at the G20 in 2009.

The campaign for increased and privileged access for the business sector could open the door for the same carbonintensive companies that are successfully lobbying against more climate ambition on the national level to influence the very architecture of an international climate agreement.

This report will show that carbon-intensive companies are acting to block key governments from tackling climate change through international and domestic policies. Without good renewable energy policies, a commitment to zero deforestation, promotion of green and decent jobs and legally binding regulation to control greenhouse gas emissions, the transition to green economies powered by clean and safe energy will not happen fast enough to avoid catastrophic climate change. Greenpeace applauds progressive corporations who are distancing themselves from the business associations who are lobbying against progress and engaging in strong efforts to ensure national and international policies and agreements to keep the world below 2°C. Greenpeace is calling on governments in Durban to listen to the people and not the polluting corporations, and: