Bolivarian alliance calls for extending and strengthening the Kyoto Protocol and climate adaptation aid to poor countries, and  opposes the commodification of forests under REDD 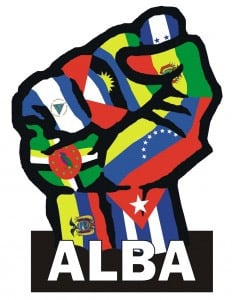 Representatives from the Latin American and Caribbean governments that comprise the Bolivarian Alliance of the Peoples of Our Americas (ALBA) met in Bolivia on November 17-18 to coordinate their battle plan ahead of the international climate change summit scheduled to start in Durban later this month.

ALBA – which includes Antigua and Barbuda, Bolivia, Cuba, Dominica, Ecuador, Nicaragua, Saint Vincent and the Grenadines and Venezuela – was at the forefront of scuttling attempts at the 2009 Copenhagen summit by rich nations to impose their anti-environmental plans that would set the world on a course towards catastrophic climate change.

This year’s summit will focus on attempts to reach agreement on the commitments for the second period of the Kyoto Protocol, set to begin in 2013.

Rejecting the idea of “voluntary emissions reductions” being proposed by rich nations, which would destroy the Kyoto Protocol and see catastrophic global temperatures rises of more than 5°C, ALBA is proposing the “continuation, preservation and strengthening of the Kyoto Protocol” as the only legally binding international framework in place today.

The conclusions reached at Durban, reads the summit’s final declaration, must be “ambitious, balanced and based on scientific recommendations and evidence, on equity and the rule of law.”

This would require compliance with the principles of the United Nations (UN) convention on climate change, “particularly”, the principles of equality and of common but differentiated responsibilities.” Developed nations, the primarily culprits for the current climate crisis, must be the ones to take on the greatest share of the burden in order to reverse current trends.

At the 10th ALBA Summit, held in Ecuador in June 2010, ALBA affirmed its position in favour of limiting “the increase in the global average temperature to a level far below 1.5°C, with an ideal stabilisation at 1°C.”

To help underdeveloped countries deal with the consequences of climate change, Bolivia raised a proposal, adopted at the ALBA meeting, for a tax to be imposed on international financial transactions. The estimated $400 billion that this would raise annually, would go towards funding technological research and concrete actions that help reduce carbon emissions.

The ALBA bloc also stated that it would fight to ensure that rich nations comply with the agreement reached at the 2010 Cancun summit whereby they would contribute $100 billion a year towards a fund to help underdeveloped countries mitigate and adapt to the challenges of climate change. To date, contributions for 2011 full far short of this target.

ALBA will also demand that rich countries contribute the equivalent of at least 1.5% of their gross domestic product to the Official Development Assistance to help poorer nations.

The ALBA bloc also agreed to Bolivia’s proposal to reject the idea of seeing forests as simply carbon-offsets to be traded on the carbon market, as it is with the currently promoted policy of REDD. In its place, ALBA will advocate a mechanism denominated “sustainable life of forest” in which an integral vision takes into account the role forest play not only in absorbing carbon but also in regards to food production, water, biodiversity, and land.

Following on from the successful October meeting held in Panama between the ALBA bloc, the African Union, and the Group of Least Developed Countries, which combined represent around 100 countries, ALBA pledged to continue strengthening this alliance of underdeveloped countries.

According to Claudia Salerno, who headed the Venezuelan delegation at the October summit, the three blocs resolved to work together to ensure that “all developed countries… close the gap on two issues in Durban: the mitigation gap by reducing emissions under the Kyoto Protocol, and the gap on financing by offering long-term financial support [to underdeveloped countries] for emissions reductions beginning in 2013.”

Tosi Mpanu Mpanu, the Chair of the African Group of Negotiators for Climate Change, stated that while underdeveloped nations “”are doing our part” what is required is for developed countries “to move forward on the issue of financing to combat climate change and reduce emissions… in order to have a successful meeting in Durban.”