We don’t have time to play these pointless games. We have to cut carbon now, directly and drastically.

Ben Courtice is a socialist climate activist based in Melbourne, Australia.

Tomorrow, World Environment Day, will be the Say Yes Australia rally called by an alliance of unions and NGOs like GetUp.

A large number of environmentalists, including the Greens party, rightly rejected the last attempt of the government to set a carbon price, the “‘Carbon Pollution Reduction Scheme.” It was shonky, riddled with loopholes big enough for a diesel-spewing truck to drive through.

What’s changed? The Greens make an agreement to support a minority Labor government and suddenly we have to accept anything Labor says because the threat is Tony Abbott’s Liberal party if we block Labor?

There’s plenty of analysis to suggest the carbon price framework is going to be shabby. Most environmentalists want a high price; it’s said that $40 per tonne of carbon is needed to drive a shift from coal to gas (not a desirable outcome, by the way); to drive large scale renewable energy investment with a carbon price it would have to be over $100.

Beyond Zero Emissions would rather the price was low (below $20), to avoid a costly detour through gas, and supplemented by other stronger measures; it looks like they will get the first part of their wish only.

It’s unlikely that much will be done for renewable energy when the final bill is enacted. A briefing I attended with my union secretary, who sits in the community forum of the multi-party committee, indicated that the Greens and the union were struggling just to get the clean energy funding in the deal lifted from 5% of the revenue to 10%. And it wasn’t clear if “clean energy” excluded polluting gas, or the modern version of the Philosophers’ Stone, clean coal.

But they are looking at including compensation for not just households, but electricity generators. Aren’t they the ones who should be punished, not rewarded?

Friends of the Earth took a brave stand against the carbon price on a principled basis of opposing inefficient, inequitable and highly corruptible market mechanisms like emissions trading schemes. A brave stand, because it was like a voice in the wilderness: no other significant NGO joined them.

This carbon price has misleadingly been called a carbon tax. All parties agree it is to become an emissions trading scheme. Even the Greens have a policy for a trading scheme, although party insiders sometimes tell me it’s not their “real” policy. Climate change minister Greg Combet has clearly stated it’s an ETS not a tax, and that it’s going to drive a switch to gas power.

There is no evidence that emissions trading schemes work, other than in the pure, problem-free theoretical world so beloved of neo-liberal economics. I could support a carbon tax if it were well framed, with appropriate compensation to households; if enacted in combination with a raft of other measures – as almost all environmentalists recognise are required to decarbonize – it might actually play a positive role.

But other than household compensation (which are given a politicians’ promise will be more than adequate) this carbon price is set to also compensate the power industry. Aren’t they the ones it is meant to be taxing?

The worst danger in the whole process comes from the way the Labor government will play this. Leigh Ewbank explains how they have played this: before the final version of the carbon price was even hinted at, they were rallying environmentalists to support it. They demanded a blank cheque, and too many gave it to them.

They are in the process of corralling the environment movement into their camp; once a weak carbon price is enacted they will use that act as an argument to silence environmentalists. We will be told over and over, wait for the carbon price to do its work. By the time that ruse wears out, many more precious years will have been wasted. We don’t have that sort of time to play games. We have to cut carbon now, directly and drastically.

I can live with having a crappy carbon price passed on one condition: that the climate movement doesn’t buy into it and legitimise it. And that’s the reason why I’m not going along tomorrow to join in unison with the ALP “just say yes” cheersquad. I will be saying, build 100% renewable energy, don’t compensate the big polluters. That’s what is needed.

The only thing that can see us through this is for climate activists to shake off the cold clammy embrace of the Labor party. Let the ALP supporters wave the “say yes” banner. We can march to our own demands. That’s what I’ll be doing tomorrow. 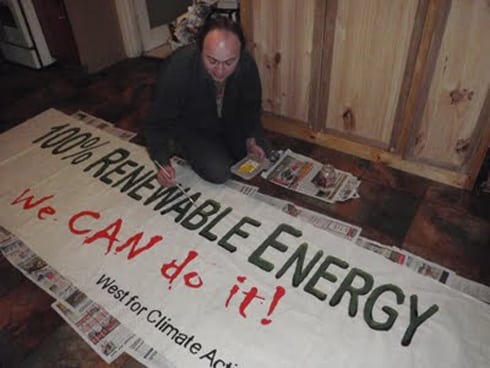