From the Met Office Hadley Centre

(July 28, 2010) Unmistakable scientific evidence that our world is warming has been released today in the ‘2009 State of the Climate’ report, issued by US National Oceanic and Atmospheric Administration (NOAA).

The report draws on data from 10 key climate indicators that all point to that same finding — the world is warming.

The 10 indicators of temperature have been compiled by the Met Office Hadley Centre, drawing on the work of more than 100 scientists from more than 20 institutions. They provide, in a one place, a snapshot of our world and spell out a single conclusion that the climate is unequivocally warming.

Relying on data from multiple sources, each indicator proved consistent with a warming world.

“Despite the variability caused by short-term changes, the analysis conducted for this report illustrates why we are so confident the world is warming.

“When we look at air temperature and other indicators of climate, we see highs and lows in the data from year-to-year because of natural variability. Understanding climate change requires looking at the longer-term record. When we follow decade-to-decade trends using different data sets and independent analyses from around the world, we see clear and unmistakable signs of a warming world.”

Dr Jane Lubchenco, Under Secretary of Commerce for Oceans and Atmosphere and US NOAA Administrator, says:

“The temperature increase of 0.56 °C (1 °F) over the past 50 years may seem small, but it has already altered our planet.

“Glaciers and sea-ice are melting; heavy rainfall is intensifying, and heat waves are more common. And, as the new report tells us, there is now evidence that over 90 percent of warming over the past 50 years has gone into our oceans.”

The report points out that people have spent thousands of years building society for one climate, and now a new one is being created — one that is warmer and more extreme.

Each of the last three decades has been much warmer than the decade before. At the time, the 1980s was the hottest decade on record. In the 1990s, every year was warmer than the average of the previous decade. The 2000s were warmer still.

“For the first time, and in a single compelling comparison, the analysis brings together multiple observational records from the top of the atmosphere to the depths of the ocean,” states Deke Arndt, co-editor of the report and chief of the Climate Monitoring Branch of NOAA’s National Climatic Data Center.

“The records come from many institutions worldwide. They use data collected from diverse sources, including satellites, weather balloons, weather stations, ships, buoys, and field surveys. These independently produced lines of evidence all point to the same conclusion: our planet is warming.” 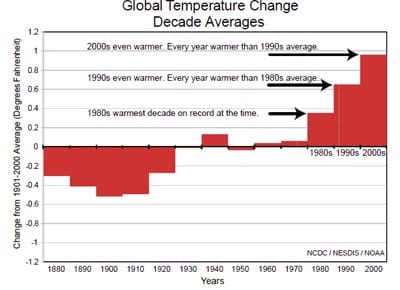